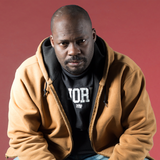 DJ/Producer Curtis Atchison is also known as MIDNIGHT SOCIETY. His name can be seen on over 200 different tracks on labels including Stealth Records, Stereo Productions, Younan Music, Twisted, and Nervous Records. His recent work includes a project with DJ/Producer Bass Rokwell on Afro Acid, plus remixes for Smash Mouth, Enrique Inglesias and Laverne Cox. He also works with DJ/Producer Manny Ward as part of RETROTECH. Together they have remixed Nona Hendryx, Black Stereo Faith, Lenny Kravitz and Neneh Cherry. Curtis has headlined parties in countries on both sides of the globe. His Drum Nation party has been featured at MMW/WMC in Miami and the ADE in the Netherlands. He is the founder and twelve year resident of the Mainframe party in NYC. Curtis is a featured artist for ACID Pro 8 by MAGIX. His record label, SoundGroove Records, is on it’s 13th year and features over 120 releases. Several songs from the label have been licensed by MTV Networks and E! Entertainment Television.