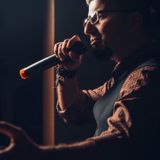 Getting far far back in time...

It all started when i was 6, I liked to dance to sing, I Remember myself watching MJ on video tape, i memorized his style of singing and dancing.

First musical experience was at young musical ensemble "Sayyah". We did a lot of recordings of Azeri Folk music in our own interpretation, we did a lot of concerts.

After That i tried myself with "Sharq Ulduzlar". Working on Pop music i combined Rap, Hip Hop, and Pop Style of singing and did a lots of records.

After that i decided to quit doing music...

But some time after i decided to try myself in "Sing Your Song" musical competition. I took the 1st place. There i met Hafiz Baxish, and i decided to stop doing what i don't want, so 5 year ago i start my Midnight journey in Progressive Rock music.

We Were composing with Hafiz, wrote such songs like "She", "Life Through Childs Eyes". We did our first concert in 2006 and from that time we are working with Hafiz together in song writing for Midnight and