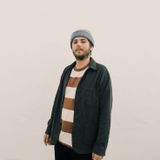 Never miss another
show from miche

Michael Davies has fast become one of London’s most exciting young selectors, having started out with just a pair of turntables in his bedroom aged just 14.

The 28-year-old serial crate digger, known as Miche, now finds himself in high demand, appearing at top spots in both the UK and into the rest of Europe, His deep knowledge and enthusiasm for collecting and playing records means he holds close ties to institutions such as Mr Bongo, BBE and more.

Thanks to his extensive collection, which spans from modern soul, disco, deep house and beyond, He has hosted slots on Worldwide FM, Brussels’ Kiosk Radio and Red Light Radio, and has also appeared at festivals such as Gilles Peterson's We Out Here festival.

Miche’s talent for bringing in global audiences doesn’t stop there, either.
As Head of Programming at London’s illustrious Spiritland audiophile venues, and the basement club SUPERMAX, his eclectic sets always sees the music enthusiasts' haunts packed to the rafters.