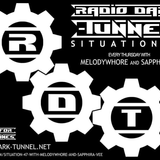 Never miss another
show from melodywhore

melodywhore is a project that started as “melody’s a whore” back in the early 2000s. the idea of the name was to be controversial. no, there isn’t a dramatic story about a relationship with a girl named melody. it was supposed to illustrate being a prolific music writer, always writing melodies, whoring myself for the music. and later the name was shortened for simplicity and melodywhore was born.

melodywhore has been involved in remixes, film composition, collaborations and now stepping into DJ mixing.