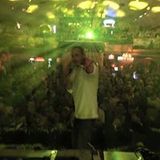 In the past 12 years the Bremen/Germany based MC with the charismatic voice and various flows, became a notion for Drum and Bass heads worldwide.
His residencies at infamous raves like "Kings of the Jungle" and "One Nation Germany" gave him the opportunity to host the sets of the scene`s big dogs like Andy C, Adam F, BSE, Goldie, Noisia, Loadstar, Pendulum, Dirtyphonics and DJ Hype, to name a few.
Temper is the only german MC who has constantly performed on an international level and in so many different countries, such as Argentina, Austria, Belgium, Canada, Colombia, Croatia, Finland, France, Italy, Netherlands, Russia, Slowakia, Switzerland and the USA.

Since 2006 he is spending a lot of time in the studio and started workin in the genres of Hip-Hop, Trap, Dubstep, Glitch-Hop, Rock, Nu Breaks and Electronica.
Next to his Hip-Hop project with the Green Berlin producer Dead Rabbit (Marsimoto/Marteria) he is and has been workin on a lot of collabos.