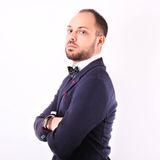 Mat Fellous began his career in the biggest clubs and radio stations in the french riviera.

Further on, he made his way in very short time to St-Tropez, he became a key figure in tropezienne nights in place like :

Mat mixes also in poch ski resort Courchevel , Megeve and at privates parties for the Jet-Set or at star studded events.

Mat Fellous has explored since then other pssibilities as music producer. Since 2017, he is co-owner of "Factophonics Records", electronic french label which allowing to release all his productions/remixes and release tracks .
He is signed on PornoStar Records.