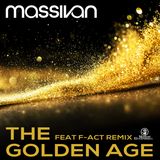 Never miss another
show from MASSIVAN

Born the son of a violinist 1971 as an italian in Switzerland, Massivan (aka Ivan Pezzini) enjoyed a classical music education, starting to play the violin by the age of six. Not much later, Ivan picked up on the drums… and finally became a student at the American Institute of Music of Vienna in 1993.
In 2000, Massivan co-founded the label imprint "Modest Records" and released five singles under the "Josef's Ruhe" moniker. One of them, "Zürihorn", went straight in the dancefloor charts, became a major peak time track on the global club circuit and got massive support from djs like John Digweed, Sasha, Timo Maas and Steve Lawler.
After having produced progressive house for 4 years, Massivan felt it was time for change… and so he started to join forces with with Jens Andersson. Their "Calmstreet" project came up with a fine blend of pop and lounge, resulting in an acclaimed longplayer called "Third Wave", released... continue reading:
https://www.facebook.com/massivan.music