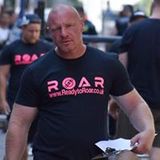 Martin started his career at the age of 13 years old in 1987, buying a transmittor and broadcasting with his schoolmates. It was during this time he developed a love and a passion that would last a lifetime.

Martin played on London wide radio stations including LWR 92.05fm and Prophecy 99.9fm and Sunrise 88.75fm, an East London station that was really making its mark with DJ’s such as Rat Pack, Ellis Dee and Bad Boy West to name a few.

After five great years on the station he founded a new station, Juice 94 FM which was to broadcast from South London. He had residency over South and East London including Stars in Greenwich, Benjys in Mile End and The Bon Bonne in Herne Hill until it closed in the summer of 2004.

Martin currently works on channel 5 Ultimate Strongman as MC and is one half of The Ginger Alliance.