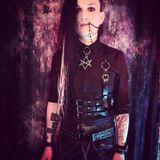 Never miss another
show from Cage

Cage is the resident DJ for two of NYC's premiere monthly dark music parties: Procession (est. 2015) and Svmmon (est. 2016). He also hosts his own successful channel on Twitch with various regular shows throughout the month (link below).

Cage has also produced remixes for: Angelspit, Chelsea Wolfe, and Cult of Alia.

Originally from the UK, he has been a regular DJ fixture in the NYC darkwave scene since the 90's and has also DJ'd in Canada, the UK, and Germany as well as performing in numerous darkwave acts both in the US and Europe. Cage was also a staff writer for Industrial Nation magazine and worked at several alternative music labels from the early 90's through the 2000's and was even the publicist for Nine Inch Nails and Marilyn Manson at one point.