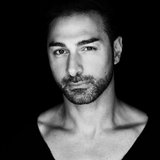 The Düsseldorf based producer & dJ is considered one of the most uprising artists emerging from GER undergroundscene.With releases on renowned labels and steady support by the world’s elite DJs–as a solo artist or exec producer behind various talents–the ambitious Rhinelander with Italian roots is right on target standing his ground in the world of electronic music.With a competent hand for impulsive grooves,experienced tech-skills, constant hard work and a proper portion of fire he tempts fate.Looking back on a varied musical history, he made his first production experiences in the early nineties.Additionally as a dj he got resident jobs in the most hotspots of his region and worldwide, which sharpened his abilities to service any audience from intimate underground spots to crowded festivals almost intuitively.Whether as producer or behind the decks–having an eye for his audience & a broad musical knowledge in his pocket,he refines his very own formula of dancefloor functioninality.