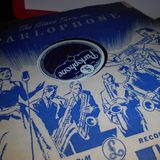 Catch Me The Blues #3
by Malcolm Noble

Catch Me The Blues - Pilot Episode
by Malcolm Noble

Ragtime
by Music From 100 Years AgoReposted

Talk Genealogy #29 Fleet Marriages and the Like
by Malcolm Noble

"This is parochial policing at its best" says The Shropshire Star. Malcolm Noble was voted into the Top Forty Favourite Historical Novelists for 2013 (HNS) and has repeatedly been in the top 20% of authors borrowed from UK libraries.

As a young man, Malcolm Noble served in the Hampshire Police, a chapter in his life that provides some background to his crime fiction. He has written eleven detective novels (and one play) that follow the characters from the 1920s through to the 1960s

Press reviews have emphasised the author's sense of place and atmosphere, his strong characterisation and first rate storytelling.

Malcolm Noble lives in Market Harborough where he and his wife run a secondhand
bookshop.