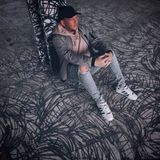 Maff Boothroyd has been a regular and popular fixture at the forefront of North England’s House, Upfront Piano, Deep House, Nu/Disco from an early age.

His inimitable energy and infectious style behind the decks is matched by his unique natural ability to move a dance floor while playing sounds of the utmost quality.
Serving as a beacon to the North England house scene. Also international bookings such as Barcelona, Dublin, Ibiza, Thailand, Zante, and more.Now signed to Now signed to [Maison records] -[Kidology London] - [Deep State] - [Conkrete Digital] - [ApartmentSixtyThree Records], Maff’s productions have hit number 1 on some of the major download sites such as Traxsource and Beatport.