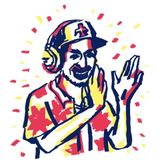 PICK UP & BIG UP WORLD GROOVE !! Vol.3
by mAsa niwayama

mAsa niwayama [GIANT SWING] from Bangkok
Originally from Hokkaido, he’s a promising Japanese DJ in Thailand, active in the forefront of music scene. In 2010, he started the party called “GIANT SWING”. It became a movement throughout Asia and won the highest praise by the party people from all over the world as well as the people from the local music industry. He’s been spending more time on the dancefloor in Thailand than anywhere else, his style seems to be free from any kind of ordinary restraints: his positive vibes and his unique relaxed personality attract everyone in the true sense. He also works for Zudrangma HQ Records Store in Maft Sai and plays brilliantly various world music such as Thai, African and Jamaican. He tours around Japan every year and making the groove wherever he goes with his perfect play.
https://www.mixcloud.com/mAsa_niwayama/