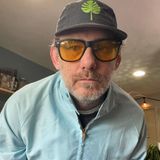 i like my house deep... i run lowercasesounds.com and the label lowercase sounds. i make art. i create spaces. i push vibes.

having started his musical journey way back in 1989, tres Johnson has been producing and djing for over 20 years. his talents have taken him to cities such as st. Louis, denver, san francisco and most importantely los angeles. It was here at a club where tres met local house heros blair and marcus of the higher ground parties. after their chance meeting, tres began a successful period of event promoting until he made his big move to omaha. It was here that tres began his weekly lowercasesounds broadcasting show in 2004, playing an eclectic array of sounds that include deep house, ambient, downtempo,and jazz. since then, lowercasesounds has grown to include over 25 djs that are located all around the world.