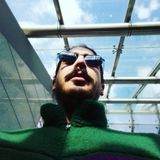 Before you go 001
by Louie Dimá

Louie ,has born in Kiato.From Greece’s thriving electronic music scene, yet another promising artist steps into the limelight.After being involved in a number of underground parties and dj’s/producer’s.Louie Dimá is talking things to the next level.With a acclaimed solo-début on his own in many ‘’underground’’ parties and famous clubs also some topic Festivals..basic in Corinthia ,Achaia and Athens..
Louie started doing in the East of Athens Corinthia,where he was working before in other jobs.The Beginning was at school parties and many free beach parties. Mixing all types of music louie manage to establish in the night dance scene…Deejaying remained a passion in those days ,only to become the main focus in later years. After he try a different musical influences along the way.His years of trips try to listen and ‘’meet’’ more underground depend music..In the following last 5 years he gets experience by other Djs/producer’s and by playing in f