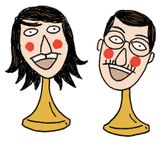 For three and a half years, artists and friends Ellie Harrison & Oliver Braid lived together in Ellie's attic flat in Glasgow. During their final year they broadcast a weekly radio show live from their living room every Friday lunchtime. The Ellie & Oliver Show was well-loved for its informal and sometimes outrageous discussion exploring the philosophies that surrounded and informed its co-hosts everyday lives. After an intense year of co-habiting and co-hosting the show, they decided it was time to go their separate ways. On the 4 February 2013 Oliver finally flew the coop. They now live at opposite sides of the city, Ellie in the West End and Oliver in the East, and have struggled at times to adjust to and maintain this new 'long distance relationship'.