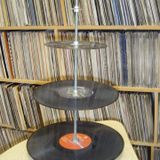 Liz and Grant Xmas Special on 1BTN live Sat 23rd Dec, all vinyl show as per.
by Liz Edwards

#yours truly liz edwards on 1bfm

Have been Djing since 1984, playing all styles of music when I first started, which was the norm in the 80's, this took me to Norway, Denmark, Switzerland and Dubai, where here I put on some underground parties also.
I returned to the UK in 1996 and fell upon Swag Records in Croydon, after a short trial behind the counter, I eventually worked there full-time, then after one of the partners took off for a long lunch break to Ibiza for 3 months, I was asked if I wanted to become a Director, this played a massive part of my career, and obviously cheap and free vinyl was added to my ever-growing collection. I also met many liked people, and have been putting on Kerfuffle Events since 1998 and this party is still going strong. My DJ career has taken me to many countries and cities I would never have dreamed of going, Croatia, Serbia, Germany, New York, Ibiza, Macedonia, Kosovo, Denver, France and Portugal.
Swag Records closed 2011 and I now own another record store Ed's Vinyl Brighton.