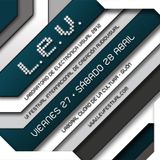 Never miss another
show from levfestival

L.E.V. stands for Laboratorio de Electrónica Visual or, in English, Visual Electronic Laboratory, is a project that offers a panoramic, eclectic and qualitative vision on the electronic music and visual creation wide spectrum since 2007.

A physical an ephemeral space, concerned about the natural synergy between image and sound, the live action, the experimentation and the constant mutations between genres and styles that emphasize the importance of music and visual art as artistic manifestations in continuous evolution.

The sixth edition of L.E.V. will take place during april the 27th and 28th 2012 at diferent venues of Laboral City of the Culture, like the Theater, the Church, the Art Centre and the Atlantic Botanic Garden of Gijón, in the north coast of Spain.