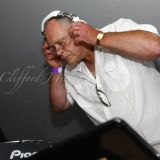 Les started spinning in the late sixty’s building a reputation in and around Harlow in Essex
In 1970 secured a residency at Tiffany’s Harlow were he persuaded the management to set aside a night just for soul/funk music and started building a night which eventually had big names as guests Such as Chris Hill, Tom Holland, Robbie Vincent and Chris Brown. Les was instrumental in bringing the ALL DAYER and ALL NIGHTER to the south of England .At Tiffany’s Harlow There were a string of these events which spread to the rest of the south east During the middle to the late seventies. In 1979 Les had a regular Friday night spot with Froggy (god bless) at the Royalty in Southgate. And guest spots at The Lacy Lady in Ilford, a couple of caister soul Weekenders came along also went on tour with the Fat Larry’s Band around 1980. After leaving Tiffany’s in the early eighty’s Les had residencies At Benny’s in Harlow / Beckets in Ware / The Juicy Duck in Bishops Stortford And then up sticks and did a