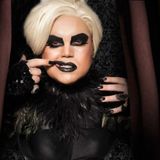 The idea behind Las Bibas from Vizcaya is to have fun, no matter what!!!

Las Bibas produces almost all the remixes that djing at your set, giving the unique touch to his music and his biggest characteristic: joy!

How dj , she is one of the 1st crossdresser-Dj in Brazil with over 25 years of cabin, started playing in the 80s with vinyl.

How artist and singer most of their songs are in Portuguese / Spanish, some lyrics even have a little touch of bad taste, as their hit single "Toda Cagada".

Your music is a mix of electronica, house, tribal, Progressive, creating songs that are specially made for the dancefloor.

LBFV classified his style "E.B.M." (Electronic Music Bibas). and she loves the gay culture, divas, slang, clubs, and glamor, and her love to celebrate his life on the way to music.