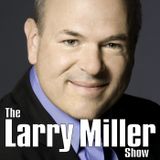 A fireside chat for the 21st century, comedian Larry Miller tells stories from his own life, in the tradition of great American radio raconteurs like Jean Shepherd and Garrison Keillor. And it's the only podcast recorded from inside an extinct volcano!

Larry is known for his roles in Waiting For Guffman, Best in Show and 10 Things I Hate About You, as well as his standup comedy.