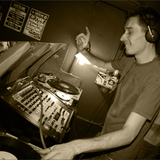 Never miss another
show from Kymatik

DJ, promoter, and joint-founder of the Soul Motive record label, Neil Schuyleman aka Kymatik unexpectedly and suddenly passed away on 9th April 2009 at the tragically young age of 34. A hugely familiar face on the Bristol club scene, Neil was known for his unfailing positivity, enthusiasm and cheerful demeanour as much as for his love of music.

His DJ sets and prolific production of mixes (most notably the widely distributed ‘Dub I Up Landlord’ series) introduced huge numbers of people to the burgeoning Dubstep scene, and its huge popularity today is a fitting testament to his passion for it.