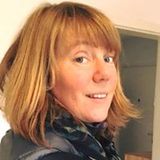 Kristin has been dancing with YaAcov und Susannah Darling Khan since 2001 and has trained with them since 2010. She is a fully qualified Movement Medicine teacher who graduated in 2016. In addition Kristin is a physiotherapist, mother and yoga teacher. Her understanding of the body supports her work and guidance in the dance. Her long training of the mind and heart in buddhist meditation practice deepens her ability to hold space with compassion. Kristin‘s call is to overcome the divide between body and mind and to establish dance as spiritual practice - fully embodying the living heart. Kristin works with movement, voice and sound and offers her drumming to invite imagination. She has worked as translator and organizer for Yaacov and Susannah Darling Khan since 2010 and alongside Christian de Sousa since 2016.

She is teaching in Basel, Zürich, Strasbourg/France and Freiburg/Germany as well as events on invitation.