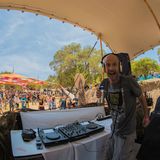 KIKX has been exploring electronic music and dancefloors since 1994. He began djing Psytrance music in 2001 and started his own label Purple Hexagon Records in 2008, with the aim to promote the music and to collaborate with the artists he had been playing in his dj sets. The role of label manager has contributed to further expand his music knowledge, bringing his ear training to the next level and allowing him to gain a fresh and strong musical awareness. Kikx is mainly known for his psychedelic dj sets, in which he develops a groovy yet hypnotic twilight oriented journeys that keep the dancefloor up and dancing. However, over the years his music quest has expanded into diverse electronic music genres, bringing him to explore alternative stages at major worldwide festivals. From psychedelic techno to deep glitch, delightful downtempo and tribal beats, Kikx merges together alternative sounds in clean and well-constructed electronic journeys at a variety of BPMs, always accompanying his