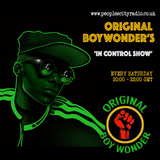 Once upon a time, Kevin Harper was simply known as Boy Wonder, founding member of legendary Leeds outfit Nightmares on Wax. Under his original alias and alongside then DJ/producer partner E.A.S.E, Harper was responsible for creating a string of pioneering “bleep techno” classics, including “Dextrous”, “Biofeedback”, “Aftermath” and “I’m For Real” – all timeless slabs of Yorkshire heaviness that remain popular almost 30 years after they first appeared in stores.

Now, you’ll find the talented DJ/producer operating as Original Boywonder. Following an album and a string of tasty singles over the last four years, Harper has decided to launch his own label, Downbeat Records, named in honour of the weekly Leeds party at which he made his name way back in the late 1980s.

The label’s first release fittingly comes from the man himself and contains a trio of Original Dubs – weighty, bass-heavy club jams designed to sound killer on sizeable