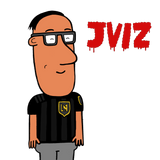 Never miss another
show from JVIZ

Jungle music still standing!
by Son Of A PitchReposted

Brewed and boiled in the caldron that is Los Angeles, JVIZ formed an early following from his explorations into Drum and Bass. 2006 spawned a new love in the form Dubstep and an alteration to the title once known as Jungle Visionary. Today JVIZ is on the forefront of the stateside movement appearing throughout the Los Angeles’ event circuit and hosting the weekly show Earthquake Weather and monthly Tsunami Weather on the infamous DUBSTEP.FM . Lesser DJ’s would have rested there, but JVIZ continued into new avenues as a founder of LA’s BWOMP! collective. As far as having the foresight to help cultivate the only crew in LA combining all of the best in bass genres- the name may have changed, but he remains a visionary.