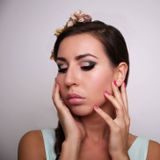 Never miss another
show from Yu Ya

Yu Ya - is a resident of Ubertrend Records since 2017. In 2018 Yu Ya released her debute release “Uncoscious Pilot” Ep, and she is going to release her second EP in January 2019 at Ubertrend Records.

Yu Ya performed her music at the Samskara Festival (2018) and the label's showcases at major Moscow’s clubs. Yu Ya’s music combines character, charisma and humor, and she is developing her distinct sound within the style of the minimal techno.