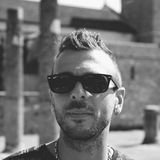 Giuseppe Gullo aka Joseph G was born in Sicily and later moved to Trieste for work and family reasons. At a very young age he started listening and dancing to the best DJs throughout the country, while later also engaging into the local scene. His first DJ experiences were held in parties and clubs in Trieste and surroundings, where he got to play together with Ian F, Alfred Azzetto, Marco Bellini, Leo Mas, Flavio Vecchi and many others.
Joseph believes that music is a matter of sounds that transmit emotions and is among the most mysterious gifts of which human beings are endowed!