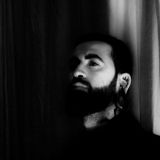 Jose Macabra was born in Toledo, Spain. With a background in psychology, he studied Digital Media and Sound Arts and Design at LCC, in London. Since graduating he has worked in various fields of the Arts, quickly becoming an established musician, curator and events promoter. After starting out with the band The Joan of Arc Family (supporting Sex Gang Children and Tuxedomoon) he went on to Performance Art, founding the group L Karma DL Trauma, which appeared at London's 291 Gallery in 2005, supporting Ron Athey’s "Judas Cradle". His personal and distinctive use of sound and image has taken him to perform in various locations around Europe; most notably in UK, Spain, Germany and Greece