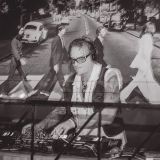 Jo Moontribe (Zero1 Music / Magic Phangan) is originally from the Mediterranean Island of Malta, where for almost two decades he was the owner of a prominent Nitespot that was well known for its Music Scene, and a party organizer since the mid-eighties, starting with Rock Music, onto Techno & House and finally PsyTrance in the mid-nineties.
After many years of traveling around the Globe, and having lived in a few different countries, in 2004 Jo sold up everything back home and moved completely to the Tropical Island of Koh Phangan in the Gulf of Thailand where it didn’t take him long to become a well know name in the international scene as a Full-on/Twilight Psychedelic Trance DJ.
Jo also forms part of ‘Magic Phangan Productions’, the Thai Organization behind Ban Sabaii, Blackmoon Culture (Koh Phangan) and The Experience Festival (Koh Tao), where he is also a Resident Dj and Stage Manager.