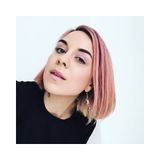 As one half of the dynamic DJ duo Collabo Queens, Johanna Ritscher has been vibrating Malmö and the rest of the world with bass since the mid 00's. She started up Collabo Club, and quickly became resident DJ at groundbreaking club The Rumble.

She's spread the deep thump, both as a solo DJ and playing with various live acts through New York, Rio de Janeiro, London, Berlin, CPH, Norway, Holland, Poland and of course Sweden. She has been opening act for artist such as Dillon Francis, Flosstradamus, Adrian Lux and played alongside Diplo, D Double E and Zebra Katz just to mention some.

When she's behind the decks she paints a dazzling collage of tropical productions spiced up with hip hop, trap, grime, UK funky and various bass drenched club rhythms.