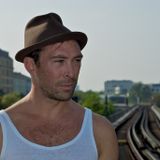 Born and raised in Gothenburg on the west coast of Sweden in 1975 Joel Alter started his music career playing the violin at the age of 10. Ever since music has been an essential part of his life.

Early inspirations were bands like Depeche Mode, J.M. Jarre and Front 242 which lead him to leave classical music for electronic. Joel have played live with jazzmusicians and composed music for the Swedish National Theater. He is in no way limited of being a techno artist.

Where different artforms meet, that is where he sees himself. After being an important part of the Swedish music scene since 1995 Joel did his international debut on Int. Deejay Gigolo Rec. in 2005
and also released on Minus in 2008. Joel is currently working with the Hamburg based label Room With a View. Also since he moved to Berlin in late 2008 he started to work closely with Savas Pascalidis and his new label Sweatshop