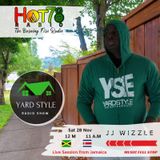 Never miss another
show from JjWizzle

JJwizzle born in Spanish town St. Catherine, was introduced to music by his older brother DeeVexx, who was a collector of music. At the age of 5 years old , He then create his own sound system that’s where he was introduced to engineering and gain yet another interest in music as he started producing dub plates for various sound systems. An engineer in practice, he recorded billboard acts such as Gyptian, Pliers, Terror Fabulous, I Wayne, Vybz Kartel and more. JJwizzle pursued his career as an international disc jockey and recording/mixing engineer.