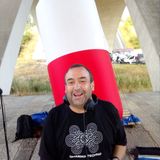 Never miss another
show from jeff23

Jeff 23 at Spiral Attack
by jeff23

THE HAUNTED HOUSE
by jeff23

Jeff 23 cut his teeth at some of the gangster-run London inner city warehouse parties. He began to DJ in 1991 and played regularly at many club events , underground parties and pirate radio in the UK. Tired of having to deal with violent criminal promoters, he joined Spiral Tribe and helped spearhead the move into continental Europe in 1992-93 .
Jeff was instrumental in forging a harder edged Techno sound which influenced the scene throughout the 90s with the release of over 50 vinyls and many cassettes as well as countless timeless performances . He is more known though for his talents as a DJ rather than a producer or liveset !
He was heavily involved in the organisation of the first large scale underground parties , freeparties and teknivals on the European mainland .
As well as being a key member of the SP23 collective he continues to organise mixed subculture events and innovate his musical style in Berlin alongside close friends and family under the name Freaky 23.