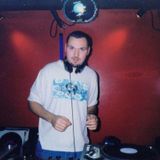 Never miss another
show from Jason Walker AKA Cosmic Jason

Loft Vibes. Xmas 1999. From SF to London. (Give away CD from Come-Unity Basement)
by Jason Walker AKA Cosmic Jason

Came to San Francisco in 1990, formed some influential parties with my old and new friends our common denominator being the Tonka Posse, a house soundsystem from London with a style still legendary to this day.By 93 i took on the Chill Out room at Come Unity and D.J.'d and booked guests for its entire life, over a decade. With a focus on chilling out we had guests such as Mixmaster Morris, Harvey (doing a left field set back in 96), Jonah Sharpe, James Glass and the list goes on. Not being fully satisfied in the Chill Out Genre i returned my attention to the dance floor and started playing house sets by the later 90's with my friends Dubtribe, doing various residencies around San Francisco and eventually touring the US in 99. I have never stopped playing and collecting records and still have a firm belief that this music/movement can bring so much Unity to the people and also create a culture of higher consciousness and understanding among its followers both dancer and enthusiast.