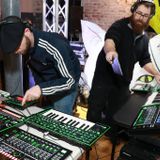 When it comes to moving the dance floor, this Connecticut DJ is considered to be one of the best! His unique style and seamless mixing of today’s hits with all-time classics, creates a sound that’s all his own. With over 20 years of experience, Jan learned how to mix and beat match long before the help of a sync button, releasing his first mix tape on a cassette. As a kid he became obsessed with djing by staying up past his bedtime to listen to Kool DJ Red Alert. Funk Master Flex, Jam master Jay, Eric B and Kid Capri quickly became his heroes, which lead to the beginning of his career as a hip hop DJ. He quickly developed a passion for house music in the early 90’s, regularly attending Danny Tenaglia’s Be Yourself parties at Vinyl(NYC) along with other major events up and down the East coast. He has been promoting parties with Caffeine since the late 90's and has now thrown many of his own parties under his company, Scientific Sound.