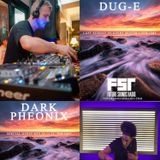 Dug-e's musical influences grew with childhood memories from Motown and soul to Dire straits, Jean-Michel Jarre, and Queen So.
In the early 90's Dug-e found dance music and had an affinity for house, hardcore jungle, and techno. DJ’s within his circle like Carl Cox, Ratty, Easygroove, and Donovan Bad Boy Smith inspired him to buy his first set of turntables in 93, and he entered into the dj world. With a mecca of nightclubs in his home town, Goldiggers (running the well-known Devotion night every Friday) was his regular spot to chill. After playing various venues regionally and locally, he got to return to this local hub and play.
Dug-e took a break from the scene for several years. In 2016, he was quickly spotted by Dance Conspiracy head honcho Marcus Allen who added him to Dance Con family with a dj residency in Nov 2017 and he hasn’t looked back. Dug-e has gone on to do special guest mixes for Meditdnb in Greece, on Blackduckradio, and on Donovan Bad Boy Smith’s show for Bassdrive.c