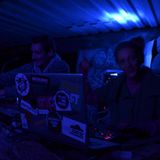 Never miss another
show from Inteamsounds

Lydia (* '84) and Sven (* '79) got to know each other on the way to the Loveparade 2001. One year later these two mixed personalities began to develop with one another. Lydia was already a big house fan in her early years, as she affectionately called the legendary Brandenburger "Fuse Club" in Massow her living room. Sven had a love for hip-hop since 1996, but he also enjoyed listening and partying to some proper techno. In 2005 they moved in together and their musical influences began to melt together. They began experimenting with DJ software and quickly developed a passion, playing out of fun and love for the music. The different musical influences slowly merged into a deep house mix. As part of the Berstival Gemeinde, they now play a mix of Deep House, Tech House and Techno, filled with vocals and influenced by the finest Acid-, HipHop- and Electronic Beats. Fun is still the focus for the two inteam lovers and they haven’t forgotten how to celebrate Techno!