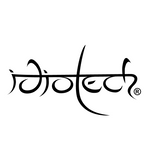 Never miss another
show from idiotech

In 2004, idiotech achieved notoriety with his remix of The Prodigy's "Girls", featured on the unofficial download album "Always Outsiders, Never Outdone" (a mashed-up and remixed version of the Prodigy's "Always Outnumbered, Never Outgunned"). Liam Howlett was quoted as saying it was his favourite mix on the album, and Warner Music approved a re-edit of the video to this remix for official release on two DVDs.

At around the same time, another of idiotech's previously unofficial remixes, this time his version of Aqualung's debut single, "Strange & Beautiful", also gained a legitimate release - on an Aqualung compilation.

Since then, idiotech has completed a number of official remixes for a range of major and independent label artists, and his mixes have received praise from DJs such as Norman Cook and Mark Moore.

DJ gigs have included The Secret Garden Party, The Egg, Concorde2, and a headline slot at 93 Feet East. His DJ sets have also been broadcast on Xfm.