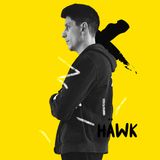 Never miss another
show from HÄWK

Riccardo Falconelli better known with his alias " HÄWK " is a music producer from northern Italy, class 1990.

He has always been passionate about music and started playing around in the DJ booth at his part time job, which gradually led to his entrance into the club scene.

Starting his career in music production in 2018, he decided to focus on what he was playing in the club, shaping his sound into a mix of club and tech house vibes. His first releases appeared on Black / Red Lizard Recordings. After that he released music on Playbox, Confession and Hysteria. Forthcoming releases and collaborations set to be on Dharma and Spinnin Records.

His music has been widely supported by A-list djs such as: Don Diablo, Hardwell, Tchami, Bingo Players, Fedde Le Grand, Mike Williams and many more.