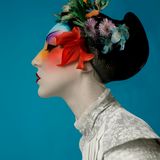 Never miss another
show from zamulan

Zamulan let's only a few talk about herself, and if she does she let's only herself, and so she declaims about herself as a person who has sold hers soul to Satan in exchange for a few moments of flirting with music and a few minutes of questionable fame.
As for the musical background she began from reaching to an unusual shelf consisting of avant-garde music, jazz, kraut and similar psychedelia. And since then Lohe love to experiment due to her stage in the development retains to this day. Zamulan,without regard to tastes of the scattered crowds on the dance floor serves the best beats from around the globe, from Pretoria, through Berlin, and towards Detroit, which are limited to the only right label that says "electronics". While, as mentioned, she does not care about the public preferences, tries to mix multigenere & extremely diverse sets.