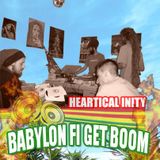 Born of the meeting between Izayas and Arni, a selector who was already known with his Weedstock parties in Payerne since 1999, Heartical Inity based itself in 2002 during the third edition of Weedstock.

The official first one of Heartical Inity took place at the Silverclub in Payerne in June 2002 with the Ambassador of the Ras reggae scene in Switzerland, the man called Asher selector from Geneva with his Positive Airline sound.

From there, Heartical Inity is no longer just a sound system, but became a Real Family with as watchword: Equal Rights and Justice for One and All.

Since 2012 Heartical Inity members have been starting to build their own lineage and raise their children. From that time Arni Ranks is still pushing the sound by different international venues and proposes a music directory going of the Reggae roots in the Ragga dancehall to Reggaeton Afrobeats and Hip hop.

In 2018 Papi Ninjah selector joined the sound by promoting and selecting particularly Afrobeats.