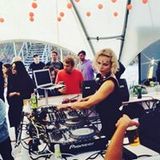 Anna Hanna is a Dj/Promoter from Moscow, Russia, now based in Vilnius, Lithuania. Born and raised in Moscow.
2007 was the year when Anna (her real name) first cut her teeth into the dance scene. Since then, she played in Moscow and in many other cities of Russia, before she left to Asia.
Anna lived in Asia for 2 years and had a chance to play in such countries as Cambodia, India and Thailand.
Currently Anna lives in Vilnius, where she has a residency in a few best clubs in city, and she's also a regular guest in the biggest festivals in Lithuania and in other Baltic countries. She also successfully organizes her own series of events with some famous Western artists.
Since 2012 Anna began to promote her series of events, called "Behind the mirror", which are still going on.
In 2014 she began to run her own series of techno music events, called 'Resolute", with guest as Psyk, Milton Bradley, Miss Sunshine, Henning Baer, Dino Sabatini, Edit Select, Tadeo and more.