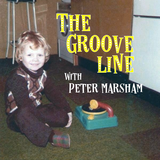 Never miss another
show from The Groove Line

I've worked on professional radio stations up and down the country including Minster FM, Lincs FM and Yorkshire Coast Radio.

I set up my own station in Hull back in 2007 and a couple of years later we beat off numerous commercial and BBC stations to win the SONY Gold Award for Best Local Radio Station in Yorkshire.

I now present the weekday evening show, a Northern Soul Show and a Beatles Box show on www.ClassicOldies.co.uk.

If you work in radio and would like the show on your schedule then get in touch.