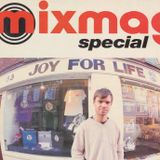 DJing since 1985. Started THE SUNSHINE PLAYROOM in Brighton in 1985, playing an eclectic mix of Soul, Motown, Punk, Post Punk, Psychedelia and Indie. The night progressed to Acid House and Indie Dance during its halcyon days. In 1991, Gordon's DJ sets moved further into dance and he regularly played at the UK's best nights, including Chuff Chuff, Wobble, Golden, Back To Basics, Rennaissance, Venus, Smile, Sterns, Up Your Ronson and The Milk Bar. He held residencies in the mid 90's at both Cream & Ministry of Sound and regularly played all over the world.
During the last three decades Gordon has produced and remixed under many names including The Centaurs, Joy For Life, The Living Eye, Apogee, Eighth Wave, Subterfuge, AutoKat, Stonemasons, Super Glider and of course....Gordon Kaye.
You are just as likely to hear him play Psych, Post Punk and Balearic as Acid House.....And everything in between, as these mixes show.