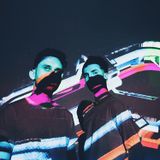 Going Deeper - hitmakers representing Russia on the electronic dance stage. In just a few years, they managed to be on the first position of the Itunes and Shazam Russia charts and work with such giants of the recording industry as: UNIVERSAL, WARNER MUSIC and SONY, as well as releases on modern dance labels: HEXAGON, ARMADA, SPINNIN, HELDEEP, CYBERPUNK, DIM MAK, SKINT, ANJUNABEATS and others cool imprints.

The co-authors of the FAR FROM HOME, TIME, TILL THE END, BROKEN and others hits loudly acclaimed on many radio stations and certified platinum holders for remix of the main hit of 2016 in CIS - LP Lost On You! Also, GD were noted by official remixes of the stars of the British pop scene Years & Years, famous electronic artists Cash Cash, R3hab and Swanky Tunes!