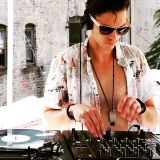 Never miss another
show from Gian-Paul

In the 1970s, a group of eclectic Brooklyn-based dancers traveled to New York’s famed disco nightclubs teaching patrons how to shuffle and groove to the famous dance move “The Hustle”. They established themselves on the dance scene as the Brooklyn Hustle.

Born and raised in NYC by a former disco dancer, Gian-Paul draws inspiration and influence from his mother’s vibrant past with musical styles ranging from disco to house to tech house and minimal.

Founder of the Brooklyn based record label inspired by his mother, "Brooklyn Hustle", Gian-Paul has played in major clubs around NYC and Brooklyn, including Good Room, Public Records, Le Bain, TBA Brooklyn, House of Yes, Paradise Club and SoHo House, SoHo Grand, and Rose Gold, and in the past year he has released a handful of varied house tracks with the label. He has also made an imprint internationally with gigs in London at Egg Ldn, Ministry of Sound, Shoreditch Platform, and Boxpark Terrace, and cities around Europe including Mancheste