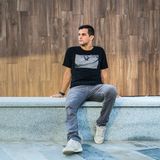 Conceptual at Insomniafm May2016
by Gabriel Floriani

Argentinian born and Dubai Based.
His passion for mixing begins in 2004 and quickly was found playing at the most popular clubs and parties in Argentina such as Pacha Buenos Aires, Bahrein Club, Buenos Aires New, Sunset, Flowers Sessions, Imsonmia, Caix After Hours and Arena Club.

His Dj sets move always in between Deep House, Tech House, Progressive House and Melodic House with the only aim to keep the crowd within a full dance floor.

In Dubai he took part of the line up at World Class Venues like Media One at Level 41, Story Rooftop, 360 Audio Tonic, Nasimi Beach Festival, "Party in the Park" hosted by " Whats On Magazine Dubai”, O2 Nightclub and more.