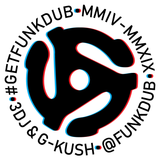 Funkdub residents 3DJ and Gentleman Kush have been throwing down funk, dub, hip-hop, rock'n'roll and soul as cold hard vinyl for a discerning audience at their own club night since 2004, welcoming a raft of of DJs and live acts along the way.

Further afield, you can hear them playing wherever they're invited, having previously been spotted on the bill alongside Andy Weatherall, Dr Alex Paterson and Jerry Dammers as well as at Boomtown Fair, London International Ska Festival, Positive Vibration and Africa Oye.

For your delectation some Funkdub mixes...