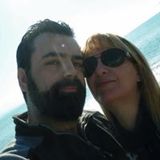 Never miss another
show from Fishimself

Haris Papadimitriou
DJ Fishimself (ambient/Downtempo)
Ambient Errorist (Techno)
Haris P. aka Fishimself is a dedicated ambient music activist. Owner of Freeze Magazine untill 2013 that
printed edition stopped: Freeze was the most important Greek magazine dedicated to electronic music since
1999.
Owner also of IT Record shop in Athens till 2011: a record shop that marked Athenian scene with the
exclusivities and events . Later turned, as many said:“Athen's best kept secret”, into a club inside a
neoclassical bulding named IT The Place/The Place until 2019 when that building was sold as most of the
buildings for Gentrification of the Area. From December 2019 he co-owns IT Athens in the center of Athens a
double dancefloor venue that supports all forms of electronic music.
He was also the organiser of the first Downtempo ambient festival in Europe Island of Fire in The Island of
Lemnos where acts : Kay Nakayama, Youth, Abakus, Aes Dana, Solar Fields , Kenji Williams and more.
He was a M